What My Boats Have Taught Me

7 Lessons My Boats Have Taught Me

Even at one knot, we'll get there eventually. And no matter how bad (or how good) the weather, it will always change. So there's no need to get agitated or frustrated and no purpose either - have a coffee, read a book, pick up the knitting, enjoy the day.

Easier said than done sometimes, especially when boisterous conditions continue more than a couple of days and one just gets tired of being bounced about. All aspects of the sailing life, one of the richest and most satisfying ways to live!

Simplicity trumps everything because complexity increases the likelihood of failure. The skill is to determine the best trade-off between what's simple yet often rudimentary (bucket'n'chuck it) and hype about convenience and reliability.

Avoid starting any job after 4pm that requires mental agility or dexterous fingers.  Almost certainly you'll cut the wood wrong or you'll think of a better way by the morning but now you cut the only piece of wood you have.

For me, the most important and satisfying element of being on any boat is the immersion in reality. Put a hole in the hull and the vessel will likely sink. Fail to adjust to conditions and the wind can overpower the sails.  Fail to keep tanks and filters clean and the engine will likely fail at the worst possible time.

In a world of spin doctors and "perception is reality" bs, where talk is cheap and earns the most, it's enlightening to be out in a world where what we say counts for little, and what we do, or fail to do, counts for almost everything.

The nomadic sailing life is far from easy; the notion of "what do you do all day?" belongs to dreamers not the practical demands of operating a well found vessel. Expenses mount up (however frugal the crew), sources of income can be hard to sustain, challenges are often daunting – in the end, it takes mental toughness and resolve to succeed no matter what.  This "whatever it takes" attitude can raise money, conjure up courage, and physical energy, and make all the difficulties and frustrations worth the effort.

Every situation can be improved by getting some rest. Physical energies rebound (if one is generally fit and well-nourished) and mental agility reawakens. What seemed insoluble a few hours earlier, now can be tackled with a plan. What seemed overwhelming, now gains perspective. Several times I've been ready to abandon the sailing life, yet all I really needed was a good sleep and to be reminded why I'm living the life of my choice.

Maybe more than any other place, good habits aboard any vessel get rewarded and bad habits get to bite you in the ...

Whether it's stowing equipment so that it can be find easily and can't fall and break, or tying a line correctly so that it doesn't come untied, or eating good, clean regularly or getting plenty of sleep, the benefits of doing things the way they're supposed to be done are legion. 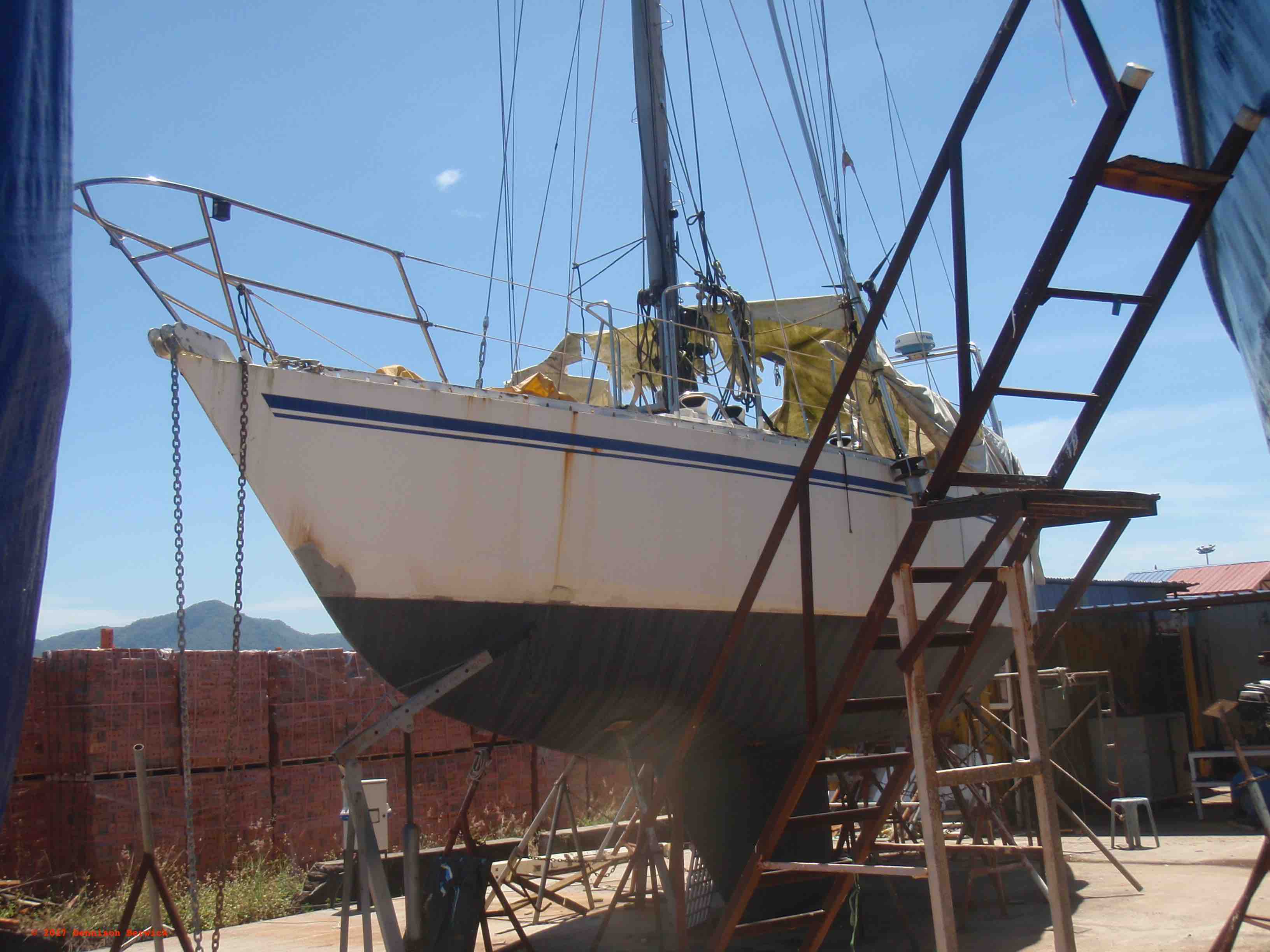 My new boat, a Chevrier 36. Built in France in 1983, extensively refitted in Australia in 2002. We're currently in Langkawi, Malaysia.  Her steel hull needs some work, but she's strongly built, with top quality fittings, sloop rigged and a 60 hp Perkins.

My immediate plans are to remain around the delightful Langkawi islands for a while, creating the drawings for the second Marine Diesel Basics book, before heading to the Philippines and then Japan. 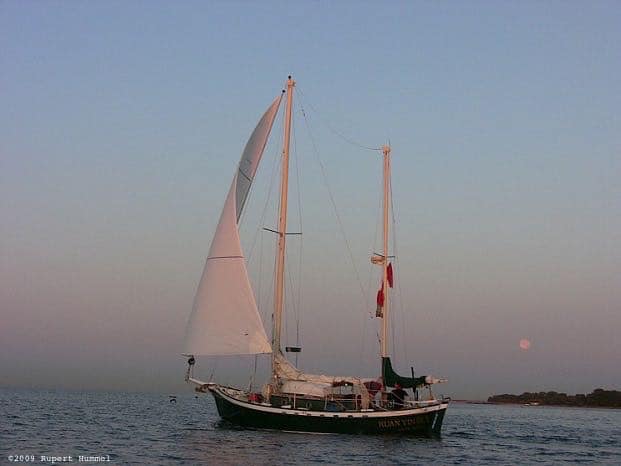 SV Kuan Yin is a 32-foot steel double-ender, rigged as a cutter ketch and is amazingly easy to balance.  In the summer of 2016, off the coast of Newfoundland, she sailed herself at about 6.8 knots for 15 hours under reefed genoa and mizzen with the tiller free and no auto-pilot or self-steering!  She rolled heavily in the breezy conditions, with 2 - 3 metre (5 - 10 foot) seas but kept her close-reached course.

I bought Kuan Yin (then with another name) in Penetanguishene, Ontario, Canada, in the spring of 2006 and immediately moved aboard. Soon after that - because she was my home as well as my boat -  I realized some serious changes were needed before she could really function as my "ship of dreams".  And as it very common, I soon let this opportunity get completely out of control. Cosmetic changes became a total refit - the expenses multipled of themselves.

Stupidly, though I rewired  the boat, the refit did not include any work on the marine diesel system. This serious "oversight" was to be my undoing. Just the day before departure from Toronto, a diesel mechanic who checked over the engine (only) found one of the engine mounts was cracked. No-one thought to ask why. These were naive days when ignorance was bliss and I believed the system could look after itself.

After great sailing, reality hit - filth in the fuel tank - just before entering the ship locks of the St. Lawrence Seaway. 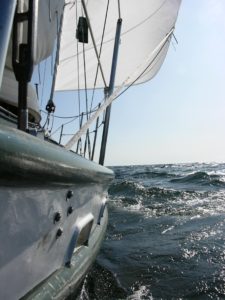 A week to pump out and flush the tanks, then onwards alone through the 7 locks of the Seaway. Little did I imagine this would only be the start of a long list of mechanical problems, which included 3 engine mounts cracking, replacing the transmission and seemingly endless started troubles.

However, after vowing to learn, and not to give up, all was sorted and working by the time Kuan Yin and I staged to cross the Atlantic. However, it was not to be on this boat.

Three days out on passage to the Azores, with various equipment problems and taking on water from an unknown source, I decided to turn back to Newfoundland.

Two weeks later, Kuan Yin was gone to a local sailing couple in northern Newfoundland, and I was leaving after 10 years.

My new purpose was - and is - to create the Marine Diesel Basics books - the first visual guides to the diesel systems which had caused so much trouble sailing in Labrador.

However, after a few months ashore, I was looking for another boat. And a Chevrier 36, built in 1983, was in need of someone to get her ready to go to sea again.

I bought my first boat on the internet for $30,000 - a Roberts 36 with centre cockpit and more than enough room for one sailor. The purchase happened accidently while staying with a friend in France during a cold winter.

A couple of months earlier, I'd sold my loft in Toronto, Canada with a view to buying and rebuilding a shack on the coast of Nova Scotia. Instead I bought John Vigor's book on ocean-going yachts and stared out to sea. Weeks later, wrapped in an overcoat and still cold, I was surfing sailboats for sale. 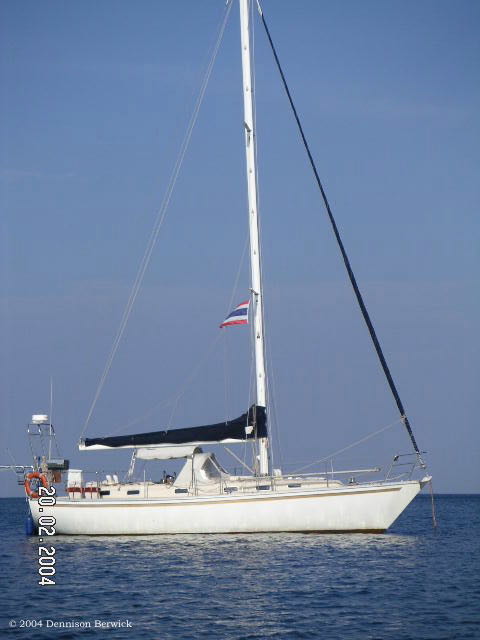 Zulu
Your engine needs you!